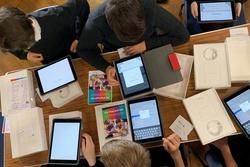 It comes as a Borders teacher got the chance to discuss Coding with Apple Chief Executive, Tim Cook