The Get into Summer programme is now live.

See the range of activities

Flying the flag in honour of Armed Forces Day 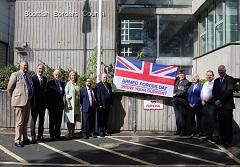 We're flying the Armed Forces Day flag at our headquarters in Newtown St Boswells this week.

Armed Forces Day is celebrated annually to commemorate the service of men and women in the Forces. This year it takes place on Saturday 25 June.

The flag was raised by Lieutenant Colonel (Retired) Colin Hogg supported by Councillor John Greenwell, SBC’s Champion for Armed Forces and Veterans, at a ceremony in Newtown on Monday 20 June.

Communities across the Scottish Borders are also being encouraged to show their support this year with the lifting of social distancing measures that cancelled events and parades over the last two years.

"I am delighted that Scottish Borders Council has once again been able to show support for our Armed Forces in a more traditional way.

“The flag has been flown during the previous two years but it was heartening to see such a good turnout for the flag raising ceremony outside Council Headquarters from those who keen to join us in acknowledging the vitally important contribution our Armed Forces have, and continue, to make to the safety and security of our nation.”