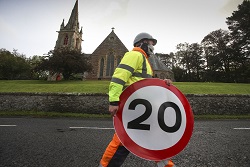 The reduced speed limit was initially introduced to over 90 settlements across the area in October 2020 as part of the Spaces for People programme.

Run in conjunction with Transport Scotland and Sustrans, the project’s aim has been to encourage more active travel including walking and cycling throughout the COVID-19 pandemic.

The trial has been run with input from experts from Edinburgh Napier University, who carried out an independent evaluation from 125 survey sites over 97 settlements.

They found vehicle speeds have reduced in almost all settlements, in some instances by 6mph, with an average reduction closer to 3mph.

As well as valuable feedback from 8,000 members of the public the Council sought the views of community councils to the trial and have worked with Police Scotland and Transport Scotland on recommendations.

Councillors voted to approve a report at a full meeting of Scottish Borders Council on Thursday.

Taking into account feedback and data, 20mph will be the default limit across towns and villages. However some settlements will have 30mph or 40mph buffer zones in place where suitable. These tend to be areas with no homes near the road or long stretches where it is felt driving at 20mph is difficult to justify and particularly challenging. These locations are available to view.

Amendments have been made throughout the pilot scheme taking on board feedback, which has included trialling buffer zones in a number of locations.

"The introduction of a 20mph speed limit across our towns and villages was a bold step but we felt it was important to give it a try and see what benefits it would bring.

“By working with Edinburgh Napier University’s Transport Research Institute on this project, we were able to get a completely independent evaluation of the trial’s effectiveness. The fact their data shows a reduction in speeds across the Borders is really encouraging news.

“I would like to thank everyone that contributed to the public consultation, providing really valuable local insight and opinions. The responses were varied but it was clear that many people noted the value of a 20mph limit especially in residential areas and near schools.

“The permanent introduction of 20mph will make our towns and villages safer for all for years to come.”

The full report and appendices are available to view online.

A range of data and feedback relating to the 20mph trial is available to view.