Help influence our next budget and plans for the future by completing our online survey before it closes on 30 January. 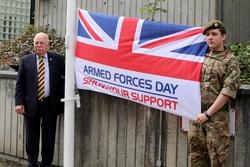 The Armed Forces Day flag is being flown at Council headquarters in Newtown St Boswells this week.

Armed Forces Day is celebrated annually to commemorate the service of men and women in the Forces. This year it takes place on Saturday 26 June.

The flag was raised by Lance Sergeant Thomas Lowrey, Cadet to the Lord-Lieutenant for Berwickshire, Jeanna Swan.

"I am delighted that Scottish Borders Council is once again supporting our Armed Forces during these difficult times.

“As was the case last year, due to Covid-19 restrictions we cannot celebrate in the usual way but will be showing our support by flying the Armed Forces flag all week at Council HQ.

"SBC has always been at the forefront in supporting our Armed Forces, recognising the historical connections and commitments made by many Borderers over the years.

“This year we are also recognising the significant role that our Armed Forces continue to play in our response to the pandemic. Here in Scotland, they have been instrumental in the co-ordination and management of a range of vaccination and testing centres and more recently have been deployed to deliver vaccines to residents in the NHS Lothian and NHS Lanarkshire areas. Similar support is available south of the Border and their efforts overall are to be greatly commended.

“I look forward to being able to celebrate Armed Forces week next year in a more traditional way but in the meantime hope you will all join me in doing what you can to honour the vitally important contribution they have, and continue, to make to the safety and security of our nation.”