Help influence our next budget and plans for the future by completing our online survey before it closes on 30 January.

Appeal for information after new play park in Peebles vandalised 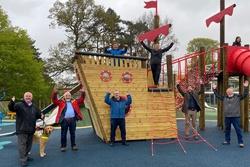 We have appealed for information following vandalism to the new play park in Victoria Park, Peebles.

A large amount of graffiti has been discovered on various pieces of equipment in the play park, which was opened in May.

The vandalism has been reported to Police Scotland, with the Community Action Team asked to provide additional patrols in the area.

Mark Rowley, Leader of the Council,

“As a Council we have committed significant funds to deliver some fantastic play facilities across the region over a number of years, and to see them mistreated in such a way is appalling."

“These play parks should be a safe environment for our young people and it is absolutely unacceptable that a minority spoil it for their community.”

Anyone with information on the damage caused is asked to contact Police Scotland on 101, quoting incident 1136 of 22 December 2021