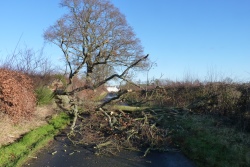 While we continue to support those affected by the impact of Storm Arwen, the Met Office has advised that there is the potential for wet, cold and windy conditions over the next 24 hours.

The forecast includes northerly winds of up to 60mph.

High winds may well result in further damage where trees and property have been destabilised by the winds during Storm Arwen.

SEPA has also warned of the potential for high tides and overtopping on the east coast at high tide - around midday tomorrow. The flood barriers in Eyemouth will be deployed as a result.

Our support for residents has included a number of hot food arrangements across the area today.

However our response has been hampered by a continued lack of information from Scottish Power Energy Networks regarding the exact locations of those still without power and estimated times of when supplies will be restored.

Through our own networks, including Resilient Community groups, the following areas are believed to be without power:

To support those residents affected we have established with partners a number of locations where hot food and drinks can be obtained today:

Ayton Primary was also open from 12noon to 2pm and the Salvation Army Food Truck was in Eyemouth initially before relocating to Chirnside due to greater need.

It is likely that arrangements will also be in place tomorrow, with locations and timings to be confirmed later today or tomorrow morning.

Residents in need as a result of the power outages can contact Customer Advice and Support Service via the normal 0300 100 1800 number up to 6pm should they require assistance.

Request for assistance continue to be handled by our Community Assistance Hub, Emergency Planning and Social Work staff. Teams are also proactively contacting those they know to be vulnerable to ensure that support is made available if required.

The Community Assistance Hubs can also arrange for hot food and drinks to be delivered if necessary.

Inspections of school in the Eyemouth and Earlston clusters are continuing and parents will be advised later today or first thing tomorrow via Groupcall should there be any issues.

An update regarding the power supply at Berwickshire High School is still being sought and again parents will be informed as soon as possible via Groupcall as to whether the school will be open tomorrow.

Crews continue to clear routes affected by fallen trees, with additional support have been offered by BEAR Scotland. A number of landowners have also taken responsibility to clear fallen trees affecting the network.

Our resources are being prioritised on routes where there is an urgent need to establish access, for example where residents remain cut off; where there is an impact on power supplies or their restoration; and to maintain the primary network.

A full audit of the road network and associated infrastructure is also underway to identify and assess any damage. Watercourses are also being checked where there are known vulnerabilities and where debris could create flooding issues in the event of heavy rain.

Parks, play parks and cemeteries are also being assessed for damage and the extent of tree clearance required.

The latest roads information can be found on our website.