Route for Scottish Borders stage of Tour of Britain revealed 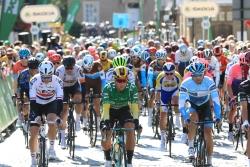 The route for the penultimate stage of the 2021 Tour of Britain professional cycle race, which starts in Hawick, has been revealed today.

The race will go ahead subject to local conditions and in line with relevant national guidelines and governing body protocols. We are working closely with event organisers SweetSpot and EventScotland to ensure that the event can take place safely.

The 195km stage on Saturday 11 September will start in Hawick town centre before heading for the Ettrick Valley, via Roberton. The riders will climb up to Berrybush, where King of the Mountain points will be on offer, then race on to Mountbenger in the Yarrow Valley.

Continuing north, the riders will head to Innerleithen before tackling the hills of ‘The Granites’ road, before cutting east to Heriot and racing down the A7 to Stow.

More King of the Mountain points will be available as the race climbs out of Stow towards Lauder and then races into Duns via Westruther. There is then more climbing as the riders head through Ellemford and Cranshaws to another King of the Mountains point at Wanside Rig.

The race will then drop down into East Lothian before a sprint for the finish line in Edinburgh city centre, in the shadow of Arthur’s Seat.

Detailed routes and timetables for the Tour of Britain stages can be found online, while more information for spectators will be announced in the coming weeks.

The Borders has a proud history of hosting the Tour of Britain, most recently in 2019 when a full stage was held entirely within the Scottish Borders, with the stage start and finish in Kelso town centre.

Once again ITV4 will screen live coverage of every stage, along with highlights every evening, with many broadcasters from around the world also showing coverage.

We are working with business, tourism and community groups to maximise the benefits of hosting the event and our investment to bring it to the area again.

“An extremely exciting route has been developed once again and will showcase the outstanding cycling offer that we have here in the Scottish Borders.

“Wherever you are in the Scottish Borders you won’t be far away from the route too, and hopefully that will mean we have great crowds out to support some of the world’s top professional cyclists, Covid-restrictions permitting.

“Attracting events of this magnitude to the Scottish Borders brings very real benefits to the area, not only on the day itself but longer term and I am particularly pleased the Hawick community has embraced this opportunity and has developed a Festival of Cycling with a wide ranging programme of events and activities around the Tour of Britain’s visit.”

David Killean from Hawick Cycling Club is helping to co-ordinate the community-led Hawick Festival of Cycling event and activity programme.

“Hosting the Tour of Britain is a great opportunity for Hawick and is an opportunity to highlight our great cycling tradition, including being the birthplace of Olympic cyclist Ken Laidlaw, the first Scot to finish the Tour de France, as well as having arguably the oldest cycling club in existence in Scotland.

“The aim of the Festival of Cycling programme is to encourage local people of all ages to get on their bikes and come and try cycling, or get back into it. We also want to attract visitors and spectators, not only to the Tour of Britain but the other cycling events coming up this summer.

“The Festival of Cycling will run from 22 August to 11 September and really does offer something for everyone – all ages, abilities and all fitness levels - and lots of it will be free. This will be the first festival in the town since 2019, so we are really excited.”

Further details of the event and the Festival of Cycling will be available on our website in due course.

About the Tour of Britain

Relaunched in 2004 after a five-year absence from the calendar, the Tour of Britain is British Cycling’s premier road cycling event, held annually across eight days in September.

The free-to-watch sporting spectacular features Olympic, world and Tour de France champions, and attracts a roadside audience of over 1.5m spectators. Live coverage of the race is shown daily in the UK on ITV4, in addition to around the world. The Tour of Britain is part of the UCI ProSeries, making it one of the most prestigious sporting events in the sport’s global calendar.