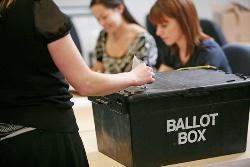 Following the close of nominations for the upcoming Scottish Parliament election on Thursday 6 May, the candidates can be announced.

Standing for election in the Midlothian South, Tweeddale and Lauderdale Constituency are:

Standing for election in the Ettrick, Roxburgh and Berwickshire Constituency are:

The parties and independent candidates standing for election via the South Scotland regional list have also been published.

Full details, and lists of polling stations, can be found online.

Polling stations will be open as normal on Thursday 6 May, with a range of measures in place to ensure that those who wish to vote in person can do so safely, including adherence to social-distancing guidelines and the wearing of face coverings.

However, if you wish to vote by post, you only have until 5pm on Tuesday 6 April for your application to be received by the Electoral Registration Officer, and you must be on the electoral register to apply.

Application forms for postal and proxy votes are available online.

Anyone who is not on the electoral register, or who has moved house and needs to re-register, has until midnight on Monday 19 April to complete the simple registration process to be able to vote.

You can register to vote by completing online registration or by contacting the Electoral Registration Officer on 01835 825100.

Voting in the Scottish Parliament election

To vote in a Scottish Parliament election, you must be: