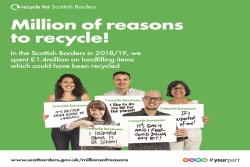 The Scottish Borders secured the biggest increase in recycling rates of any area of Scotland in 2019, according to the latest SEPA statistics.

The significant improvement meant the Scottish Borders was also well above the national average of 44.9%.

Why has our recycling performance improved?

The dramatic rise in recycling has been attributed to the Scottish Borders becoming a landfill-free area in July 2019 after the procurement of a new residual waste contract.

Levenseat Limited was awarded the contract, which involves the transport and treatment of the 42k tonnes of residual waste produced in the Borders each year.

What is the process?

The residual waste is collected from our Waste Transfer Stations (WTS), including a new purpose built facility at Easter Langlee near Galashiels, which opened in 2019.

The waste is then transported to Levenseat’s site in West Lothian, where the majority of the waste is treated to produce a refuse derived fuel, to generate heat and electricity, as well as recover materials which can be recycled.

The contract allowed us to meet the Scottish Government’s landfill site ban, well ahead of the original January 2021 deadline which has since been extended to 2025.

We also launched a communications campaign last year entitled Millions of Reasons to Recycle, which highlights which waste items go in which bin, and the significant environmental and financial benefits of recycling.

A series of videos have been produced to highlight how general waste is now treated, and encourage recycling:

More information on what items can and cannot be recycled, and our waste and recycling services, are available from:

The SEPA report is available.

The decision to close the landfill site at Easter Langlee and develop a Waste Transfer Station at the same location was made by Councillors in August 2015.

This decision was made following our detailed review, which concluded it was the most flexible and cost effective way forward for us and the Scottish Borders.

“I am delighted with this considerable improvement in our recycling rate, which fully supports our decision to go landfill-free in 2019.

“I would encourage all households to continue to play their part and help our local environment by recycling as much as possible, with advice available on our website including a series of interactive videos.”

“We must thank the Borders public for their continued recycling efforts which, alongside the removal of our landfill site and new residual waste contract, has helped us achieve the biggest improvement in Scotland.

“This is a hugely positive step forward for this Council in terms of reducing our impact on the climate, with more actions to come following our declaration of a climate emergency last month.”

“By closing our landfill site and instead having our residual waste either recycled or turned into a fuel to generate heat and electricity, we have been able to reduce the levels of harmful greenhouse gases released into our local environment.

“Despite being a rural area, we remain at risk from climate change which is why the Council’s Sustainable Development Committee aims to play a key role in overseeing the development and implementation of an ambitious action plan for the Council.”