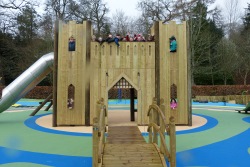 A series of exciting new play parks will be created in 2020-21 as part of our £4.8million play parks and community outdoor spaces programme.

Play parks in Peebles, Duns, Eyemouth and Newtown St Boswells are all part of our plans for this financial year.

What is the play parks and outdoor community spaces programme?

The play parks and outdoor community spaces programme has already led to seven modern and inclusive play facilities being opened across the Borders in the last three years, alongside a significant £250k contribution to the already popular new pump track at Wilton Lodge Park in Hawick, which opened this summer.

The 2020-21 programme is set to begin with a new destination play park in Victoria Park in Peebles, which is currently going through the planning process and can be viewed on our plannig portal.

Designs for the play parks in Duns, Eyemouth and Newtown are currently being finalised and the proposals for these communities will be announced in the coming weeks.

As part of the programme, there are also plans for a new play area and skate park in Jedburgh, a new skate park in Galashiels and a series of youth/fitness shelters.

“The Council’s plans this coming year for Peebles, Duns, Eyemouth and Newtown are very exciting, and they come on the back of the successful delivery of play parks in Hawick, Galashiels, Oxton, Stow, Harestanes, Coldstream and Kelso.

“I am particularly excited by the Peebles proposals, which promises to deliver a massively enhanced facility for the local community.”

“On the back of previous successful projects, I am looking forward to this year’s programme that will enhance facilities for young people in more communities across the Borders.

“If approved, the new Peebles play park will provide an outstanding range of equipment and facilities for young people.

“This development forms part of much bigger plans for Peebles that will include a 3G pitch at the High School as part of its redevelopment.”