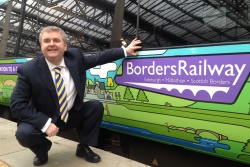 In the week that the Borders Railway celebrated its fifth anniversary, we have reiterated our commitment to the case for the potential extension of the line.

September 2015 saw the Scottish Borders receive global attention with a host of events which marked the return of rail to the area for the first time in 46 years.

What happened five years ago and what has happened since?

"The success of the Borders Railway has come in many different forms.

“It has attracted people to live, work and visit the Borders, and in the opposite direction it has given Borderers the opportunity to connect to the rest of Scotland and the UK more easily for commuting and leisure purposes.

“A number of positive projects have also been taken forward to attract more people to the Borders since the railway opened, with a number currently being developed.

“These include the Borders Innovation Park in Tweedbank, where work began this summer and is a project which has the potential to create over 380 jobs, and the continued progress on the Great Tapestry of Scotland gallery and exhibition centre which is due to open next year.

“Scottish Borders Council remains fully committed and supportive of the case for a potential extension of the line to Hawick, Newcastleton and onto Carlisle, with the Borderlands Growth Deal-funded feasibility work into an extension due to begin soon.

“The extension of the line would be a catalyst to help regenerate the economy of the Borders.”

“The Borders Railway is the longest new domestic railway to be constructed in Britain for more than 100 years.

“As a result, the introduction of the railway five years ago was a momentous occasion not just the Borders but the whole country, particularly when Her Majesty The Queen officially opened the line in Tweedbank.

“The millions of journeys made since 2015 on the Borders Railway are testament to the hard work and commitment by various organisations, partners and campaigners to return rail to our area for the first time since 1969.

“The benefits the railway have brought to the Borders are significant and include encouraging visitors to explore our beautiful area, increasing the use of public transport which has reduced the use of car journeys and attracting people to work and live in our area.”