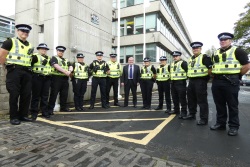 A total of £1.4m worth of drugs have been recovered by the Scottish Borders Community Action Teams since their introduction two years ago.

The milestone was reached this month with significant drug recoveries in Kelso and Hawick.

Introduced in April 2018 from our funding, the CAT have focussed on important local issues such as anti-social behaviour, drugs, illegal parking and theft.

In its first year, the seven strong CAT carried out almost 300 drug searches on people and premises, issued nearly 900 parking tickets, took part in more than 100 static road checks and conducted over 900 hours of high visibility foot and mobile patrols.

As a result of its success, a second CAT was introduced last year, which has helped more drugs to be recovered from communities right across the Borders.

Their role has adapted during the COVID-19 response, with more than 230 mobile patrols being carried out in April 2020 to ensure the CATs remain visible and the public remain compliant with the government’s COVID-19 regulations.

“To take drugs worth more than £1m out of our communities is an excellent result for the Scottish Borders Community Action Teams.

“Since the CATs were introduced two years ago, they have made a significant difference to community safety right across the Scottish Borders.

“I would continue to encourage members of the public to engage with the teams, through their local Councillors, should they have any concerns in their area.”

“The Community Action Teams have proved an invaluable asset to the communities across the Scottish Borders over the past two years as they have allowed our officers to focus on matters raised by local communities through their elected representatives.

“Drug dealing and use has an enormous impact on communities - not only the supply but the knock on effect of other crime such as robbery, housebreakings, theft and antisocial behaviour, which affects more than just those dealing or supplying drugs.

"By taking nearly one and a half million pounds worth of drugs off the streets we have seriously disrupted those who deal in drugs and associated criminality.

"People who supply drugs have no regard for the harm they cause, however, the public can be assured that we will continue to pursue those involved in this illicit trade and do everything we can to rid our communities of these drugs."

The quarterly performances of the CATs are presented to Councillors are available on our website.

The last quarter for January to March 2020 has not yet been presented to Councillors due to the COVID-19 response but for April 2020, the CATs carried out the following: