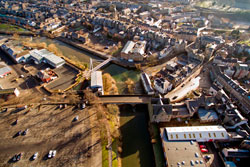 Preparations are now underway to recommence work on the £88m Hawick Flood Protection Scheme, in line with the Scottish Government’s construction industry guidelines.

The Scottish Government announced today that, from Monday 22 June, the construction industry can move into phase three of the six phase road map.

We are currently reviewing the full implications of the Scottish Government’s announcement on when works can commence again on individual capital projects.

Work immediately stopped on the Hawick Flood Protection Scheme on 23 March following the government announcement of a lockdown.

During this period, we announced the appointment of McLaughlin and Harvey as the Main Works Contractor.

The firm is now preparing to set up site compounds ahead of the start of works to deliver the new flood protection defences for Hawick.

Other preparations have included the development of new safe systems of work to take account of the new social distancing requirements for all works related to the scheme.

The Advanced Works Contractor, SBc Contracts, is also making final preparations to return to complete the public utility diversions and site preparation works that they were undertaking prior to lockdown. This work is now programmed to be completed by early 2021.

One of the key first tasks for the Advanced Works Contract is the closure of Commercial Road on the evening of Monday 29 June for approximately six months.

The closure has been thoroughly discussed with local businesses and traffic diversions agreed with Transport Scotland, the Flood Protection Scheme’s Traffic Management Working Group and ourselves.

The closure will mean Commercial Road is shut from the North Bridge roundabout to the Sainsburys entrance but throughout the works vehicle and pedestrian access to the shops, properties and businesses situated along Commercial Road will remain open at all times via diversions.

All diversions will be clearly marked by static and variable message signage.

Access to Commercial Road shops and businesses during the road closure:

“The safety of our staff and the public remains our number one priority at this challenging time, and our approach has been to carry out essential services only in line with the Scottish Government’s guidelines.

“The construction industry has been impacted significantly during the Coronavirus lockdown but with the Scottish Government allowing the industry to move to phase two, we are now reviewing the position of our various capital projects on a case by case basis, including the Hawick Flood Protection Scheme.

“The Hawick Flood Protection Scheme’s Project Team has spent the last two months during lockdown carrying out detailed preparations for an eventual return to work.

“Everything has been planned with great care and we are ready to put our plans into operation on the ground in the coming weeks.

“A vital part of those preparations has been to ensure the safety of members of the public and construction staff in these times of Covid-19.

“Every safe and appropriate measure will be put in place on-site to ensure we meet the most stringent social distancing and personal hygiene standards.

“We would like to thank the people of Hawick for their ongoing patience and understanding during the works including the Commercial Road closure.

“These works are essential for the delivery of flood protection to the town.”

The total scheme costs will be £88m, including the main works contract, which represents a major investment in the infrastructure of the town of Hawick. Contributions to the overall scheme costs include:

It is estimated that if these four projects were to be carried out independently of each other, the overall cost would be in the region of £101m. It means the Scheme represents significant value for money in terms of the public purse.