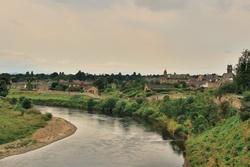 Our Executive Committee is being asked to support an ambitious partnership project which aims to create a world-class long-distance route based around the River Tweed.

The ‘Destination Tweed’ project is being developed by Tweed Forum in collaboration with ourselves and other partners, with the Executive Committee being recommended to allocate almost £175k to ensure the successful development of this large scale project.

In addition to our investment being sought, Tweed Forum has made a funding application to the National Lottery Heritage Fund for almost £3m, and it is hoped that the Borderlands Inclusive Growth Deal will also provide financial support of £11m, the project being identified as its key tourism project in the deal.

It is estimated that the total project cost could be £20m and could provide a shared-use trail stretching from beyond the source of the Tweed above Moffat to the river mouth at Berwick-upon-Tweed.

The vision is for the trail and visitor experience to include a digital smart phone audio trail which would include tours, music, images, video, augmented reality and geo-mapping.

“The idea to use the River Tweed as the basis for an ambitious and far-reaching tourism destination, beyond just the riverbank, has been an ambition of many people for a number of years. We have now reached a point where there is a significant opportunity to take it to the next stage thanks to the funding that may be available.

“The Tweed is famed for its salmon fishing and its catchment characterises much of the Borders’ landscape. With traditional rural industries such as fisheries and farming are increasingly fragile and tourism has to be an even more important part of the future. This project would build on the outstanding natural, built and cultural heritage and visitor attractions along its banks to attract significant additional numbers of visitors to the Borders area.

“This project would deliver multiple benefits from Moffat to Berwick, including the regeneration of key buildings, community projects, river restoration and the delivery of a modern, innovative tourism experience unlike anything else in the south of Scotland if not the UK.”

“The Tweed is an incredible natural and cultural asset that is largely off the radar to many in the UK and beyond. This project will change that and create a journey from source to sea that will showcase the beauty of the river and connect up the myriad houses, castles, towns and tell the rich and varied story that is Tweed.

But the project is far bigger than just the trail itself – we also be looking to restore woodland, rivers and designed landscapes; interpret key archaeological sites, create cultural activities and involve and educate children and people about the importance of the river to the region and how it is managed.”

The full report can be found as part of the Executive Committee agenda on our website.

Tweed Forum is a charitable trust and umbrella organisation whose remit is to promote the sustainable use of the Tweed and protect and enhance the natural, built and cultural heritage of the region.

The Borderlands Partnership (made up of Carlisle City Council, Cumbria County Council, Dumfries and Galloway Council, Northumberland County Council and ourselves) was established in 2014 and has worked on a shared ambition to unlock the south of Scotland and north of England’s potential as an economic hub to encourage new business and job opportunities.

In September 2017 the partners set out a vision for the future in ‘The Borderlands Inclusive Growth Proposition’ and sent it to the UK and Scottish Governments to consider.

Following the submission of a formal proposal in September 2018, the Borderlands Partnership welcomed the announcement of a £345m deal from the UK and Scottish Governments in March 2019.

It is anticipated that this investment will deliver an extra 5.5k job opportunities, attract more than 4 million extra tourists and unlock investment in towns across the area, boosting the region’s economy by £1.1bn.