Gold is the colour at the Borders Best Bar None Awards 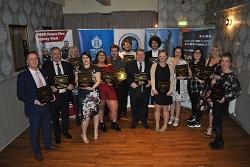 A record number of licensed premises from across the Borders were celebrating last night at The Buccleuch Arms in St Boswells, as Best Bar None Borders held its annual local awards.

Best Bar None Scotland is a not-for-profit funded national accreditation and award scheme, working to reduce crime, reward excellence, and raise standards so everyone can enjoy a safe night out.

Gold was very much the colour on show, as 21 venues from the across the county were accredited under the Best Bar None Scheme for their outstanding efforts in helping to create a safer environment for the public. Each venue that applied was visited by an independent assessor and judged on their efforts around the prevention of crime and disorder and securing public safety.

Three Borders venues had even more to celebrate, after they were nominated for Best Bar None Scotland’s National Awards, taking place in Dunblane Hydro on 19 March 2020.

Best Bar None Scotland was developed in partnership with the Scottish Government, Police Scotland, The Scottish Fire and Rescue Service, Licensing Boards, the Scottish Licensed Trade Association and many other local partners. It works to raise standards amongst licensed venues, recognising positive management helping to facilitate safe and enjoyable nights out for the public.

Nick Walker, Best Bar None coordinator for the Borders

“Again, we have enjoyed an excellent year for Best Bar None in the Borders. We have 21 venues taking part, with 16 of them achieving Gold accreditation meaning they are going ‘over and above’ in terms of improving safety and best practice. Best Bar None plays a vital role in ensuring everyone can enjoy a safe night out, and I would like to congratulate all the venues which have taken part. Safety has to be the first priority on a night out, and all our licensed premises have shown a real commitment placing the welfare of staff and customers first.

“I have to give special mention to the venues which have been short-listed for the National Awards. This is fantastic recognition for all their hard work and very well deserved.”

Councillor John Greenwell, Chair of the Scottish Borders Licensing Board

“We have had a fantastic response to the Scottish Borders Best Bar None Awards, with 21 premises being recognised, up from last year’s total of 18.

“It’s really reassuring to see our bars and hotels taking customer care and safety seriously, which is what Best Bar None is all about. I congratulate all of our worthy winners and also wish Kelso’s Queens Head, Plough Hotel in Yetholm and Central Bar in Peebles the best of luck in the national Best Bar None finals.”

“I would like to congratulate Nick Walker and his team, and all the venues which have taken part this year across the Borders. You can see that collectively all their hard work is making a real difference in raising safety standards and reducing crime. We also look forward to welcoming the three nominated Borders venues to Dunblane for the Nationals on the 19 March.”