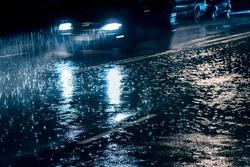 We continue to reassure residents that despite a flood alert and weather warnings being in place further widespread flooding is not expected.

A Yellow Weather Warning for rain covering the western half of the Scottish Borders ended at 11am today.

The levels of rainfall experienced were consistent with the forecast and river levels have, as anticipated, risen as a result. However, those most vulnerable watercourses have peaked and are now falling back.

Some passing snow showers are expected throughout today, but will have limited impact.

A Yellow Weather Warning for rain for 6am to 9pm is in place for Friday, again for the western Borders. Persistent rainfall is expected throughout the day, with 20mm expected widely and up to 40mm possible over higher ground.

This will again impact on river levels, which are expected to peak above those experienced today. It is likely that some flood warnings will be issued, however we continue to reassure residents that widespread flooding is not expected. Rivers levels are not anticipated to rise as fast or peak as high as last weekend.

Whilst there is a continuing focus on the flood risk it will also be a windy period with Yellow Weather Warnings for strong winds valid for both Friday and Saturday.

On Friday the focus is for gusty conditions across the eastern Borders in particular and then the potential for strong gusts in association with passing showers across much of the country on Saturday.