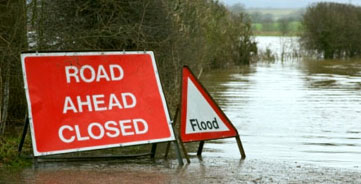 Three sections of rivers in the Borders reached the highest on SEPA’s records as Newcastleton reportedly experienced some of the worst flooding in its history last night.

Hawick’s Slitrig Water, the Jed Water at Chesters and the Liddel Water at Newcastleton all reached record level highs.
The Amber warning for rain which was in place until 8pm last night brought a period of heavy rainfall and this, combined with melting snow resulted in a rapid rise in river levels. Some river gauges showed a rise of over 1.5m in less than three hours during the late afternoon.
SEPA issued a total of 17 flood warnings of which 3 moved to severe for the rivers Teviot and Slitrig in Hawick and River Liddel at Newcastleton early Saturday evening. This came about from a very rapid rise in river levels of a combination of heavy rain on saturated ground and snow melt.
Serious flooding impacted Newcastleton where a rest centre was established at the Health Centre, around 15 people attended. Along with fire service and police resources, we were all deployed to assist the community. It is understood that many homes were inundated with flood water with damage caused to roads in the area. The rest centre closed around 1am with all residents returning home or making alternative arrangements. The B6399 Hawick to Newcastleton road remains closed with the alternative route being the B6357.
In Hawick, the river levels were above those experienced last week and were the highest on SEPA’s record on the Slitrig Water. Levels on the Teviot were similar to Storm Desmond but not higher.  More than a dozen streets were under threat of flooding, with residents advised of the danger and offered the opportunity to attend a rest centre in the Teviotdale Leisure Centre. Around 22 people attended and the rest centre closed at around 1am after residents either returning home or making other arrangements.
Repairs to the flood defences at Richmond Row, Jedburgh held firm, despite the river level there also peaking above the level of last weekend. The Jed Water at Chesters reached a new high recorded by SEPA. The A68 at the Shell Garage was closed between 9:30pm on Saturday and 1am on Sunday.
The Ettrick Valley was affected by flooding as well as Peebles where a small number of properties were affected. The Tweed levels were significantly lower than those experienced during Storm Frank.
Roads across the area continue to be affected by some flooding and surface water.
The A699 at Kelso Showground remains closed. Drivers are being urged to not ignore any road closure signs.
If anyone would like to request for help, please contact us via our out of hours service on 01896 752111.

“Whilst the rainfall on Saturday was lower than last weekend, combined with the snowmelt and saturated ground it led to a very rapid increase in river levels and significant surface water flooding.
“The Council was able to deploy resources across the affected areas, providing sandbags and putting in place flood defences. We worked extremely closely with colleagues from Police Scotland, Scottish Fire and Rescue Service and numerous Resilient Community groups to respond to the flooding.
“This has been an extremely challenging period for these communities, especially coming just a week after previous flooding events.
“We have worked throughout Saturday evening and overnight to support these communities, understand the extent of the damage caused and develop recovery plans.
“We are indebted to resilient community groups, Hawick Flood Group and our partners in the emergency services for their assistance.
“The emergency planning bunker remains open at SBC HQ to plan the recovery and clean-up operation to support residents and businesses.”