Further weather warnings in place for rest of weekend and Monday 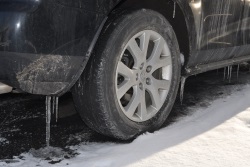 Following heavy rain and flooding overnight Saturday into Sunday, a weather warning for snow and wind is in place covering the whole of Monday and Tuesday.

The Yellow Weather Warning is valid from midnight Sunday to midnight Tuesday, with up to 10cm of snow possible over 300m. This covers almost entirely the whole of the Scottish Borders. Whilst accumulations at low levels may only be temporary, strong winds will lead to blizzard conditions at times, as well as drifting snow. There may be local accumulations over higher ground of up to 20cm.

This may lead to travel disruption and power cuts, due to the risk of frequent lightning.
A Yellow Weather Warning for wind remains in place throughout Sunday.
Residents are urged to continue to be prepared for the impact of this weather.

Our Emergency Planning Centre has been operational from 11pm on Saturday, with staff from a range of services monitoring and responding to the heavy rain which resulted in widespread local flooding. It will open again early on Monday morning to respond to any wind and snow related issues.

Due to concerns about potential property flooding in Hawick, preparations were made for the opening of a rest centre in the town. However as the Teviot peaked twice below the critical level this was not required.

Building Control officers have been involved in the assessment of damage caused to a riverside building in the Albert Road area of Hawick.

Flooding in low-lying areas of Jedburgh resulted in the closure of subways, while flooding also impacted on the Tweed Green area of Peebles. Some streets in Newcastleton were also affected by flooding, but no properties were impacted.

The A699 at Springwood Park, Kelso has been closed due to flooding. The river is unlikely to peak here until at least 4pm and therefore the road will likely remain closed overnight. Drivers should not ignore road closed signs.

We would like to thank Hawick Flood Group, Newcastleton Resilient Community Group, Tweed Valley Mountain Rescue, SEPA, Police Scotland and Scottish Fire and Rescue Service for their assistance overnight and this morning in dealing with flooding issues.

Details of the weather warnings can be found on the Met Office website.