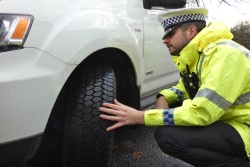 A campaign has been re-launched to appeal to road users to drive responsibly – or risk losing their vehicle.

The Scottish Borders Safer Communities Team and Police Scotland have teamed up on the anti-social driving initiative, which is warning drivers not to use their vehicle in an anti-social manner.

Legislation means a car can be seized immediately by the police for such behaviour, with the vehicle’s owner then liable for recovery and storage costs.

The campaign has been re-launched due to continued issues with anti-social driving in certain areas of the Scottish Borders.

What is deemed as anti-social driving?

Careless driving such as driving inappropriately close to another vehicle or using a phone while driving can also lead to prosecution.

What are you doing to raise awareness of the implications?

The Scottish Borders Safer Communities Team has provided information to schools and colleges on how drivers can stay on the right side of the law, while Police Scotland will be carrying out checks on vehicles across the region.

Young people are also being encouraged to sign up for the advanced driver scheme to improve their skills. Available to 17 to 25 year olds, the course fee of £149 is fully refunded upon completion of the course as part of the award-winning Drivewise Borders Scheme.

"The message from this campaign is that anti-social driving will not be tolerated in the Scottish Borders.

“Anti-social driving may seem a trivial issue but it can lead to fear, alarm and annoyance with other members of the public and in the worst cases a serious collision can be the result.

“Legislation exists allowing the police to seize a vehicle where a driver is found to be driving in an anti-social manner.

“We would appeal to drivers to think of others and drive in a responsible manner at all time. Otherwise, you could lose your car.”

"It is disappointing to hear of continued issues with anti-social driving in some areas of the Scottish Borders.

“Driving in the Borders can be an enjoyable experience for both local people and the many visitors who come to the area.

“However, anti-social driving can mean people are put off visiting the Borders, and in the worst case scenario lead to an accident.

“Owning a car is expensive but anyone caught driving in an anti-social way will not only have their vehicle seized but have to pay recovery and storage costs, so being a responsible driver really is worth it.

“For any young person, the advanced driver course is a great way to learn new skills and become a better, more responsible driver.”