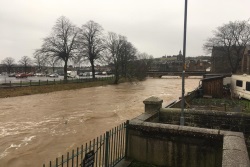 Hawick had a ‘close shave’ last weekend following heavy rainfall which resulted in rising water levels in the River Teviot, according to the Hawick Flood Protection Scheme Project Director.

“People in Hawick would have watched with concern this past weekend as the water in the Teviot rose rapidly to the highest levels we have seen for some time.

“Flood warnings were issued along the length of the river as it flows through Hawick and there was a very real risk that the river could have breached current flood defences and burst its banks, leading to the sort of significant and damaging flooding the town has experienced in the past.

“A review of the river levels from Saturday indicate that this event was just short of a 1 in 10 Year Flood Event.

“There was water out of bank at Lower Mansfield Road close to Hawick Royal Albert United Football Club.

“Thankfully no property was flooded on this occasion, the rain abated in time and water levels have come down from their peak.

“However, with further heavy rain forecast for the week ahead, the authorities are rightly remaining vigilant.

“Undoubtedly, this has been a close shave and we are not out of the woods yet.”

Councillor Gordon Edgar, our Executive Member for Assets and Infrastructure

“This is a timely reminder of exactly why we are about to start construction work on the Hawick Flood Protection Scheme.

“It will be one of the biggest flood protection schemes ever undertaken in the UK and is, of course, absolutely vital for the town.

“On completion in late 2022, it will provide modern, effective flood defences and more importantly the Scheme will provide security and peace of mind for the people of Hawick.

“With flooding rarely out of the news these days, I know that local authorities and other flood event specialists across the country are taking a keen interest in the design and construction of the Hawick Scheme. In many ways, Hawick is set to lead the way in showing how to manage flood risk in the 21st century.”

The Scheme is currently undertaking its Advanced Works programme in advance of the Main Works Contract which remains on programme to commence in spring 2020.

As part of its efforts to keep the public fully informed, a new Hawick Flood Protection Scheme newsletter has been designed, and the first issue is currently arriving in letterboxes across the TD9 area.

The newsletter will be followed by a new Scheme website in February.

The Hawick Flood Protection Scheme will deliver multiple benefits to the town of Hawick, maximising the cultural, heritage, educational, environmental, energy and health opportunities in partnership with the community and external organisations.

This has included the creation of Community Vision and Traffic Management working groups to ensure key community stakeholders can help shape the project.

The six main elements of the scheme are as follows: