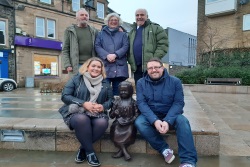 The Coulter’s Candy feature in Galashiels has been completed with the installation of sculptures dedicated two of the lullaby’s main characters.

The statues of a boy and girl, named Little Jock and Wee Jeannie, are a tribute to Robert Coltart’s world famous children’s lullaby which references both.

The verses from the Coulter’s Candy lullaby which reference Little Jock and Wee Jeannie are:

The new additions will sit alongside the statue dedicated to Coltart, which was unveiled in September by folk singer Jimmie Macgregor, who recorded and performed Coulter’s Candy on national television in the 1950s and 60s, helping to popularise it.

Hundreds of people attended the ceremony, which included local schoolchildren as well as over 30 relatives of Coltart who attended from across the UK.

Angela Hunter, who hails from Galashiels

"It is wonderful to see the figures of Wee Jeannie and Little Jock in place.

“This completes the scenario honouring Robert Coltart which I hope will appeal to all ages and become an added attraction to Galashiels.

"I would also like to thank Powderhall Bronze for their hard work and support throughout this project."

Graeme McIver, who has been championing Robert Coltart’s story for over 10 years

"The song Coulter’s Candy is arguably Scotland’s most loved children’s song so it is wonderful and appropriate to see Poor Wee Jeannie and Little Jock, names lifted from verses, join the statue of Robert Coltart to complete Angela Hunter’s vision.

"Angela has managed to capture perfectly both the anticipation of the little boy rushing to purchase the sweets as well as the wee girl, sitting eating the famous candy. You can see the pleasure in the faces of what would have been poor, mill workers children.

“The Coulter’s Candy statue has proved very popular since its unveiling back in September and I’m sure the addition of both children will make it an even more loved attraction that will delight young and old alike and visitors to the town as well as residents of Galashiels.”

“The additions of the children Jock and Jeannie will help tell the story of this much loved ‘Candy Man’ Robert Coltart.

“Since the Coulter’s Candy statue was installed in September, The Market Square is rarely without children and adults taking photos and reading the story all with smiling faces.

“I am very proud to have been involved in this wonderful project.”

“This whole project has now culminated in a unique children centred sculpture which will have a lasting influence on how Galashiels is seen in other places.

“It shows that history can be reflected in ordinary people, not just the famous or the infamous.

“It has been a pleasure to work with so many people on this to see it through.”

Images from both unveilings are available at our Flickr page.