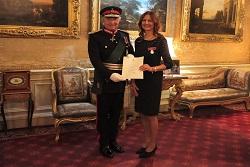 A St Boswells woman who promotes healthy living amongst older people across the Scottish Borders has been recognised with a British Empire Medal (BEM).

Amanda Richard received the BEM from The Lord-Lieutenant for Roxburgh, Ettrick and Lauderdale, The Duke of Buccleuch, in a ceremony attended by friends and family at Bowhill House.

Recognition for work with older adults

Amanda has worked with older adults since 2004 to develop and raise awareness of the benefits of a healthy lifestyle through exercise for all.

Following her early involvement in the Guid Fettle program, Amanda has continued to undertake further courses and qualifications in health and exercise promotion for older people.

It proved a great success not least because Amanda believed that making things fun was a key element in the serious business of maintaining good health. Her Funtastic Fitness programme is now run weekly in St Boswells, Melrose and Selkirk, and includes nursing homes.

Membership numbers have grown throughout the years, a clear indication of the popularity of the classes with some of the original members still joining in.

The classes aim to maintain flexibility and strength in joints, improve balance and coordination as well as manage chronic aches and pains, with various exercises and dance routines included.

The Lord-Lieutenant for Roxburgh, Ettrick and Lauderdale, The Duke of Buccleuch

“Amanda’s ability to inspire is amazing and her dedication to her work is obvious, continually devising original routines, finding appropriate music and sourcing props to allow a wide variety of people to take part in her classes.

“She has been widely praised and her efforts to encourage older people to engage in classes have brought social and community benefits as well as the obvious health improvements.

“Amanda is a very worthy recipient of a British Empire Medal.”

"I am humbled and proud to be held in such high esteem for the work I do, in a job that I love."