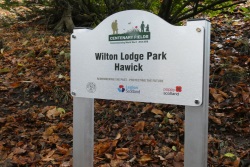 Three parks in the Scottish Borders have been included in a UK-wide World War I commemoration honouring the memories of soldiers who fought and died in conflict.

Duns Park, Wilton Lodge Park in Hawick and Lower Green in West Linton have been named as Centenary Fields by Fields in Trust.

The designation ensures that the parks will remain available as recreational spaces for the community in perpetuity.

What is the Centenary Fields programme?

The Centenary Fields programme is delivered in partnership with PoppyScotland, highlighting the nation’s gratitude to the generation who served in WWI.

The scheme aims to protect parks and green spaces as an innovative way to honour the memory of the World War I servicemen and also those, military and civilians, who played their part on the home-front to build a better life for the benefit of generations to come.

The three parks met the Fields in Trust’s criteria – which includes hosting a war memorial – and as a result were put forward by us.

Wilton Lodge Park has the Boer War and War memorials, alongside being the home of Hawick Museum which houses the town’s collection of hand-painted war memorial inscriptions.

The Lower Green also includes a war memorial dedicated to those who fell in the first and second World Wars.

Centenary Fields which are protected as part of this programme include war memorials, parks and recreation grounds, memorial gardens, playing fields or other green spaces with a significant World War I link.

“Each is now included forever in our programme to commemorate World War I.

“Protection of these sites not only recognises the sacrifices of those who gave their lives during the conflict, but also ensures that future generations have valuable green space to enjoy as a living legacy.”

“My own father and his brother left Stow to fight in France. They were fortunate and came back but both after long periods in hospital having been seriously wounded.

“I therefore have a personal reason to applaud this initiative, which will mean our local communities will always have somewhere for play, take part in sport or have a quiet moment of reflection.”

Wilton Lodge Park has recently undergone a £3.64million regeneration project funded by us and the National Lottery Heritage Fund, and has a coveted Green Flag Award. More information on Wilton Lodge Park is available.

•        Centenary Fields is a programme in partnership with The Royal British Legion, Poppy Scotland and Legion Scotland the programme protected parks and green spaces in perpetuity to honour the memory of the millions who lost their lives in World War I. The programme was launched in 2014 by Fields in Trust President HRH The Duke of Cambridge who invited landowners across the UK to dedicate, as Centenary Fields, playing fields, recreation grounds, memorial gardens or parks which contain a war memorial or have some significance to World War I.