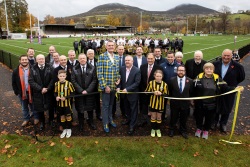 Hundreds of junior and senior sportspeople have helped mark the official opening of the new Melrose 3G community sports pitch.

The new pitch at the Greenyards was opened by Doddie Weir on Saturday 2 November as part of a full day of sport which included junior football, girls rugby, a Southern Knights training session and two Melrose Rugby’s senior XV games.

The £1million pitch will provide an all year round playing surface and a variety of community benefits to local sports clubs and schools.

We have led on the project alongside Melrose Rugby, with support from Scottish Rugby and charity Live Borders.

What facilities are on offer and who will look after bookings and maintenance?

The new pitch includes new floodlighting and a spectator walkway, and is fully expected to result in a considerable increase in sports participation at all levels.

Bookings and maintenance of the new pitch will be administered by Live Borders, who have gained considerable experience over a number of years in managing synthetic pitches across the area.

More information on bookings for Melrose 3G pitch is available from Live Borders.

The new surface will also assist Melrose Rugby with its aims of becoming more community focussed and sustaining its long term future.

Councillor David Parker, our Convener, who was heavily involved in negotiations to secure the new 3G pitch at Melrose

“This is a fantastic day for Melrose and the surrounding area and we thank all our partners for making this project a reality.

“The Greenyards pitch is owned by the Ormiston Trust, whose sole aim is to make sure that it provides important community facilities for all and the new 3G community sports pitch will certainly do that.

“The Council has worked closely with Melrose Rugby on this project. We are exciting about their plans for the Sevens tournament next year and will fully support its bid to host the Sevens World Cup, which, if successful, would be a game-changer for sport in our area.”

“We know the physical and mental benefits sport provides, and having another quality 3G pitch facility available for all to use all-year round will help increase participation.

“Significant numbers use the Galashiels and Hawick 3G pitches every week, and we expect Melrose will see the same positive usage of its facilities, as highlighted by Saturday’s full day of sport.”

"Melrose Rugby is delighted with the opening of the new 3G pitch.

“This has been a long-standing ambition of the club since the launch of our Legacy project in 2017. The new 3G pitch with floodlights will allow the club to continue competing at the highest level as well as being an incredible asset that will enable other sporting activities and events.

“The club would like to thank all its support partners involved in this inclusive community-focused project. It will mark an exciting new chapter for us as we open our doors to other sports clubs in Melrose and the surrounding area.”

“It’s great to see the newly installed pitch ready to be utilised by the Southern Knights, Melrose and now the wider community.

“The installation of the new surface has been possible through the efforts of Scottish Borders Council, Live Borders and Scottish Rugby to ensure that more people, young and old, will be able to enjoy the facility and ensure the club’s sustainability for many years to come.

“I look forward to seeing some high quality rugby on the pitch in the very near future.”

“The team at Live Borders welcomes collaborative and partnership projects, and we look forward to further close working with all those involved in the 3G pitch, including the local community.

“We are incredibly supportive of facilities that not only drive participation but create opportunities for all ages and abilities, all-year-round.

“We have seen significant usage at the 3G pitches in Galashiels, Hawick and Kelso and look forward to bringing the expertise and experience developed in these locations to Melrose.

“This project has also presented the opportunity for us to further develop and invest in our team with three new jobs created, all with a focus on our objective of people in the Borders being healthier, happier and stronger.”

Melrose Rugby carried out consultation with the community and stakeholders such as the Scottish Football Association, charity Live Borders, local schools, sports clubs and traders, who were supportive of the 3G project.

Previous 3G pitch projects involving ourselves and Live Borders have provided a number of benefits:

The Greenyards pitch is owned by the Ormiston Trust, which is made up of the three Leaderdale and Melrose ward Councillors.