Progress being made with Earlston flooding issues 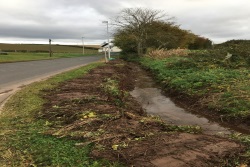 Work is underway to improve flooding issues in Earlston.

East End in the village has been flooded on a number of occasions in recent months, the latest incident occurring in early October during heavy rainfall which forced the A6105 road to close.

Our officers have visited the site several times and spoken to local residents, with issues being identified with:

The small burn which flows under the High School junction, which then flows out of bank and onto the road, has been identified as the main issue.

Investigations showed there was a low point in the bank of the burn close to the High School road junction.

As a result, temporary measures to plug this low point and vegetation clearance in the burn have been carried out. The burn will continue to be monitored prior to a formal reinstatement being carried out.

We have also inspected and cleared the road gullies in the area and undertaken a CCTV survey of associated drainage pipes, some of which are believed to be partially blocked. Measures are being explored to address this issue.

We are also preparing designs to improve the local grille and will liaise with local residents in due course.

Finally, advanced diversion signs are being prepared to reduce delays for road users travelling along the A6105, which links the east and central Scottish Borders.

“These works which will aim to reduce the likelihood of flooding in this area, for the benefit of local residents and road users.

“The A6105 is a vital cross-country route for the Scottish Borders and we want it to remain open for our communities to use.”

An image of the work carried out at the local burn is available on our Flickr page.