Plans in place for winter weather 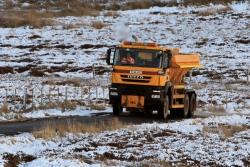 As a category one responder we are taking steps to ensure we keep the public safe and roads open during the winter months.

Due to ongoing industrial action, which may be extended, arrangements have been made for contractors to carry out gritting and snow clearance this winter in some areas of the Borders. We are working closely with them to prepare so they are ready to be called upon as required.

We value all our staff but cannot support or agree to discriminatory practices such as those being proposed by Unite representatives.

“Due to the ongoing industrial action by a small number of roads department staff in some of our depots, we have been in discussions with experienced contractors around the availability of resources so that we can meet our legal obligations this winter.

“We understand Unite plans to ballot relevant staff on extending the current industrial action to March next year. Bizarrely they are arguing this is because we are making use of contractors to fulfil our obligations as a category one responder under the Civil Contingencies Act – we are, but only because of the ongoing industrial action by Unite which has resulted in staff opting not to participate in the out-of-hours winter maintenance programmer.

“Unite representatives have issued a list of demands for increased payments which would only apply to an all-male group of workers such as a standby payment 275 per cent higher than all other Council workers. It is astounding that Unite representatives would actively seek to discriminate against female workers.

“We now have well-developed plans in place with a number of contractors and believe there will be absolutely no impact on our normal service this winter. In fact, the flexibility that these contractors provide has opened up opportunities to pre-treat roads differently in some areas, which may actually benefit more drivers, particularly those travelling earlier in the morning.

“Our contingency plans continue to make use of all legal means to ensure that not only is our winter service unaffected, but that any disruption to our day-to-day roads operations are absolutely minimised during this industrial action.

“It is extremely disappointing that Unite continues to argue that the Council should move away from the terms and conditions agreed with all the trades unions and the principles of fairness and equality to settle this matter.

“This is not something which the Council is prepared to do, and it is baffling that Unite, as representatives of a wide range of staff, is seeking to continue and in fact escalate unfair and unequal practices.

“To reiterate previous statements, the Council has NOT changed terms and conditions for this staff group, nor have we failed to consult the trades unions or the staff affected.

“We discovered some months ago that a small number of staff in the roads section had been claiming a higher rate of overtime than they were entitled to under the agreed terms and conditions. They were also claiming for time to travel to work when working overtime, which again is not in line with the agreement in place.”

The only action we have taken is to remedy these unfair practices.