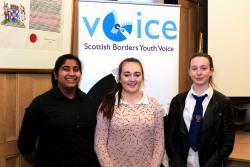 A by-election is being held for the Ettrick, Roxburgh and Berwickshire Constituency of the Scottish Youth Parliament (SYP), due to take place in December 2019.

There are three elected representatives in the Scottish Borders serving as Members of the Scottish Youth Parliament (MSYPs). They are elected by their peer group and serve for a two year term, campaigning on the issues that matter most to Scotland’s young people. They are supported by staff from Scottish Borders Youth Voice to attend three sittings of the SYP a year and to deliver and develop local and national campaigns. They can also sit as members or convenors of committee groups.

The by-election is being held because Tanya Thomson, one of the existing MSYPs has stood down, opening up the opportunity for a new candidate. The person who is elected through this by-election will serve until the handover period in June 2021 after the 2021 election.

Schools covered by the constituency

The constituency covers the catchment areas for the following schools:

Register an expression of interest

Young people aged 14-25 who are interested in standing for the constituency are being encouraged to register their interest by completing an online Expression of Interest form on the SYP website.

They can do this between Tuesday 1 October to Friday 25 October 2019.

Following that, applicants will be invited to a meeting at the start of November 2019 where they can meet the other current MSYPs and be helped to develop their candidate profile and plan their election campaign.

Campaigning for the by-election will run from 18 November to 2 December, with the election itself being held between 3 and 11 December 2019.

The results will be announced at a declaration event on 13 December at Council Headquarters, Newtown St Boswells.

“I would like to thank our outgoing MSYP for all their hard work and commitment and wish them all the very best with their future career.

“As they have said, being a MYSP is an extremely rewarding and worthwhile experience and I would encourage young people from across Ettrick, Roxburgh and Berwickshire to follow their example and find out more about what they could achieve by taking part.

“All candidates are given training by Scottish Borders Youth Voice to develop their skills and confidence, making them ready to run their campaign for the elections. Once elected, MYSPs continue to be supported to carry out their responsibilities to the best of their ability. This really is an opportunity not to be missed and I look forward to seeing how the nominations progress and meeting the young people who are keen to be involved.”

Images from the elections held in 2019 are available on Flickr