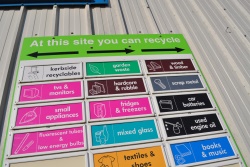 The new arrangement will see

We took the decision to move to summer and winter opening hours earlier this year to ensure the service better met the needs of the public, and ensure it remained sustainable for the local authority.

Figures available from five of the seven community recycling centres show almost 10,000 visits were made to the sites during the later summer opening hours from April to August this year.

The decision was made following an extensive review which considered waste survey results and community recycling centre user figures.

Councillor Gordon Edgar, our Executive Member for Roads and Infrastructure

“I would like to thank the public for using the community recycling centres so far this year, including the thousands who used the new summer hours to visit after 5pm, when the centres were previously closed.

“While there is a change to the weekday opening hours for winter, weekend hours remain unchanged, with all facilities open Saturdays and Sundays, when demand is higher.

“In line with our Millions of Reasons to Recycle campaign, I would continue to encourage the public play their part and use our community recycling centres to help the environment and public funding, with a huge variety of items being recycled at our centres.”