A lasting tribute to Coulter’s Candy 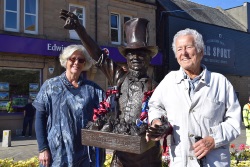 A sculpture to remember a 19th century Scottish sweetmaker who penned a world famous children’s lullaby has been unveiled.

Attendees included folk singer Jimmie Macgregor, who recorded and performed Coulter’s Candy on national television in the 1950s and 60s, helping to popularise it, and over 30 relatives of Robert Coltart from across the UK.

Who was involved in project?

To mark the sculpture unveiling, The Borders Family Society is hosting a small exhibition dedicated to Robert Coltart in their Overhaugh Street office. It opens today and then every Tuesday, Wednesday and Thursday from 10am to 4pm.

“The song exploded in popularity across the world after we sang it on the Tonight programme.

“The song has an amazing history and I think this is a wonderful tribute which Galashiels should be proud of.”

“I am delighted to finally see Robert Coltart returned to his hometown.

“It has been a fantastic project to work on with the Council, Energise Galashiels Trust and local community. I worked closely with local historians to try to ensure the finished sculpture reflected the descriptions of Robert Coltart from the time, as well as his flamboyant character.

“I am looking forward to adding the two sculptures of a boy and girl to complete the piece.”

Graeme McIver, who has been championing Robert Coltart’s story for over 10 years

“My interest in his story began when I witnessed a Japanese film crew visiting Galashiels in the late 1990s to research the life of Coltart, but until now his story has largely been unknown in his hometown.

“Robert Coltart was well known across Galashiels and the Borders in the late 19th century for selling his boiled sweets at fairs and festivals, dressing in a variety of colourful clothes, and singing his much loved lullaby song to help advertise his wares.

“It is fantastic that Robert Coltart and his famous song can now be remembered and recognised by his local community.”

The funding from the Scottish Government is also supporting new visitor signage and improvements to Channel Street and Douglas Bridge, as well as helping to fund the Great Tapestry of Scotland visitor attraction.

“The Coulter’s Candy project is part of a wider regeneration plan for Galashiels which we hope will help transform the town and provide wider benefits to the Scottish Borders.

“Alongside Energise Galashiels Trust, we hope to present these ideas to the local community in the coming months. These will aim to make sure the town is prepared to grasp the opportunities presented by the Borders Railway and arrival of the Great Tapestry of Scotland visitor attraction - which helped secure the overall support from the Scottish Government Regeneration Grant Fund.”

“We want Galashiels to be a vibrant, welcome and confident community – Robert Coltart’s story and this project reflects all of these themes.

“We hope local people will take pride in the sculpture and with a number of other positive projects being taken forward in the town, will help encourage more visitors to come to Galashiels.”

“When I heard about the research which had been carried out by Graeme McIver and Mary Craig, I got involved with the team of officers at the Council to find a way to bring this wonderful and unusual project to fruition.

“It is credit to them that we have now achieved that ambition.”

Thanks to Booker Wholesale Galashiels for donating sweets for the schoolchildren who attended.

Images from the unveiling are available at our Flickr page.

The pupils to win the Coulter’s Candy design competition were: