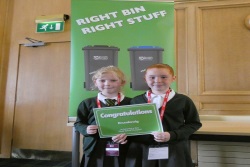 A new schools project which will see pupils aim to encourage their families and communities to recycle more has been launched.

A total of 19 schools from across the Scottish Borders have signed up to the Zero Waste School Champions scheme as part of a three month pilot initiative taking place until December 2019.

The pupils and teachers will carry out audits of their recycling patterns at school and at home, and aim to carry out positive projects within their communities to encourage more people to put the right waste in the right bin.

The Zero Waste School Champions project is part of our new Millions of Reasons to Recycle campaign.

Images of the Zero Waste School Champions launch are available at our Flickr page.

Millions of Reasons to Recycle

The launch saw our waste team give further information on what can and cannot be recycled, the impact on the environment of waste, in particular plastics, and other useful tips to ensure waste is not contaminated.

Mo Brown, lead for the Learning for Sustainability Group, outlined what online materials were available for the Zero Waste School Champions, and Debbie Matthewson of Stow Primary and Tom Rawson of St Mary’s School in Melrose gave their peers some ideas from the recycling projects they have carried out.

“We have seen the influence young people have had around environmental issues, in particular climate change, and great work is already going on in many of our schools.

“I am delighted we now have Zero Waste School Champions across the Borders and I am really looking forward to seeing all the great ideas pupils come up with over the next three months to help their schools and families put the right waste in the right bin.

“The Council has carried out some positive projects to help the environment, such as the closure of our landfill site at Easter Langlee which will see a reduction in harmful greenhouse gases and hopefully an improved recycling rate. The public are also doing their bit, with recycling across the Borders saving £2million in landfill tax.

“However, we are also aware we could all be doing more, which is why the Millions of Reasons campaign has been launched, which aims to provide clear information for the public on what can and cannot be recycled.

“The more we recycle, the more our communities benefit.”

“It is fantastic to see so many schools engaged with the first Zero Waste School Champions project, which includes both primary and secondary schools.

“The launch event highlighted the good work already going on and we hope inspired our Zero Waste School Champions to help change behaviours in our communities around recycling and the environment.”