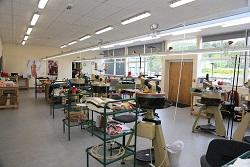 A total of 11 buildings are taking part in Doors Open Day on Saturday 14 September, providing visitors and local people with the chance to look inside, with tours, demonstrations and performances on offer alongside two guided walks.

Doors Open Day is a national initiative celebrating its 30th year in 2019. Organised by the Scottish Civic Trust throughout September each year as part of European Heritage Days, the Hawick event has been developed by oursleves and Hawick Archaeological Society.

A number of venues can be accessed only by advance booking and not all buildings are open all day, full details are available on the Doors Open Day website.

“Hawick Archaeology Society is delighted to work alongside the Council to host Doors Open Days in the town, which was last held in the town 20 years ago.

“A range of buildings will be open across the town to reflect Hawick’s rich built heritage.”

“Hawick has a long and colourful history which can be traced back as far as the 12th century.

“Doors Open Day aims to highlight this history, as well as some of the new architecture which has been created in recent years.

“Each participating building has made arrangements to welcome visitors, and there is truly something for the whole family.”

A Hawick Doors Open Day brochure has been circulated across Hawick and the Scottish Borders.