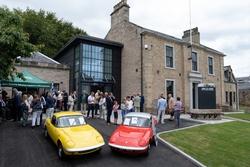 The museum in Duns opens on Thursday 29 August.

The event will start at 12noon, with Sir Jackie privately touring the museum before unveiling a plaque outside at around 1.45pm. A publicly broadcast Q and A session with Sir Jackie and Allan McNish will take place outside the museum.

To allow for the official opening, the museum will not open to the public until 3pm, but will remain open into the early evening.

Newtown Street in Duns will closed between the New Road/Langtongate junction and Duns Library Contact Centre for the official opening.

There will be a static display of vehicles owned by Club Lotus members and let the public to gather to watch and listen to the Q and A session.

The one hundred thousandth Lotus ever built, signed by all 20 current Formula One drivers at this year’s Monaco Grand Prix is available to win for £20 helping to raise funds for the Trust and new museum. Enter online.

“We are delighted that Allan, a fellow Trust Patron, is joining Sir Jackie this week for the official opening of the museum.

“Jim Clark was an inspiration to a generation of Scottish motorsport stars including Allan McNish, David Coulthard and Dario Franchitti all of whom are Patrons of The Jim Clark Trust and we are extremely grateful for their support. As the current team principal of the Audi Sport ABT Schaeffler Formula E team and a three time winner of the 24 Hours of Le Mans, Allan is an excellent addition to the Q and A session, which will also feature family, friends and sporting contemporaries of Jim.”

“The official opening of the new Jim Clark Motorsport Museum will be a fantastic occasion and the closure of a small section of the street will not only enable a display of Lotus cars but also the public to gather to hear Sir Jackie talk about his friendship with Jim Clark and their time racing together, as well as his thoughts about the new museum.

“I’m sure this will attract a large crowd from far and wide and it is great that charity Live Borders has made arrangements to open the museum to the public from 3pm to give visitors the chance to see inside once the official opening event concludes.”