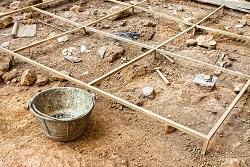 Highly detailed laser scans have been published online covering more than 60 square kilometers of the stunning Lammermuir landscape between Duns in the Scottish Borders and Garvald in East Lothian.

This has been achieved through an innovative new heritage project which seeks to involve the public in helping archaeologists explore the rich and diverse remains of human activity over the last 10,000 years.

The Whiteadder: Heart of the Historic Lammermuirs project is being undertaken by AOC Archaeology on behalf of ourselves and East Lothian Council. The project centres on the use of 3D laser scan data, obtained by LiDAR (Light Detection and Ranging), to identify previously unknown archaeological sites and features which will enhance the understanding of the human uses of the area.

The data has now been published to the project website with volunteers invited to search the mapping, comparing it to historic maps and known archaeological records to identify new sites of interest.

A series of training workshops will be delivered by professional archaeologists across the Borders and East Lothian, giving an introduction to working with LiDAR data from any PC or tablet, how to interpret and recognise sites and compiling lists of target sites for further investigation.

These sites will then be visited by groups of volunteers and archaeologists, to survey and assess the physical features and evaluate them for further investigation, potentially including excavation.

Alongside the archaeology project, CMC Associates of Penicuik will be leading on an exploration of cultural associations between people and the river. Artists, writers, photographers and others are invited to create expressions of their sense of the Whiteadder valley and its heritage.

The final stages of the project will see the development of a heritage trail and ‘archaeological atlas’, which makes use of the results of the project as well as the cultural contributions from local artists, writers and poets.

The first excavations planned as part of the project will take place at the site of Morham Castle in East Lothian.

Excavations will take place from 9am to 4pm on Tuesday 27 August to Saturday 31 August. Whether you are a well-seasoned digger or this is your first time wielding a trowel, the excavations are open to all. There is no cost for participating in the excavations, and training will be given in excavation and recording techniques aligned with the BAJR Archaeology Skills Passport (which is also provided).

For more information, or to sign up to volunteer, please email [email protected] with the days you would like to volunteer or phone 0131 440 3593.

The project is being supported by funding from LEADER, developer contributions from windfarms in the area and the Fallago Environment Fund.

For information on how to get involved please visit the project website.

“LiDAR scanning is such an exciting technology for archaeologists, giving us an unprecedented picture of the development of the landscape over 6000 years of human settlement and farming.

“The volume of information we are likely to generate from this project is huge, and we’re very much looking forward to working with volunteers on the identification and investigation of this new dimension to the area’s archaeology.”

“I am excited to see this project get underway. Despite being so close to Edinburgh, the area around the Lammermuirs is one our least understood historic landscapes. Yet, it contains incredibly important archaeological riches such as Edin’s Hall Broch, the Iron Age fort on Cockburn Law and several important medieval ecclesiastic and secular sites.

“Due to the Whiteadder Water providing a vital route through this landscape over thousands of years there is an immense collection of sites from all periods and this project will greatly add to our understanding of how people and landscape interacted over time.

“But, more importantly, the Lammermuir hills continue to be a living, breathing landscape with a unique cultural heritage. This project will hopefully help inspire the valley’s residents and those who visit to feel and explore the quiet power of this historic river in the hills.”

Airborne LiDAR involves laser scanning from an aircraft. Billions of measurements are collected using pulses of laser light to create very high-resolution terrain models. By analysing those terrain models, archaeologist can identify traces of human activity such as: