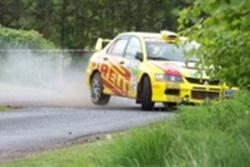 We are likely to approve plans for the return of the Jim Clark Rally to closed roads on November 8 and 9 this year.

Significant work is being undertaken by the event organiser and partners before final approval is given.

Our recent consultation on the organiser’s plan received more than 700 responses. A majority support the proposals for 12 rally stages, using four routes, over the two days.

Our Safety Advisory Group process enables ourselves, partners and event organisers to discuss event plans, including safety arrangements. It is the responsibility of event owners to make their event as safe as possible.

“I’d like to thank everyone who took part in the consultation. A number of specific points were raised and these have been passed to the event organiser and discussed through our Safety Advisory Group meetings.

“We are all operating under new legislation in planning for this event and that has its own requirements and a significant amount of work is still required before we could provide formal approval and a Motor Sport Order for the event.

“However, we are confident that the outstanding matters can be dealt with through the intense planning process that is ongoing and for the event to take place as currently proposed.”

“Whilst a smaller event than in previous years, there is no doubt that a Jim Clark Rally in November would provide an economic boost to the Berwickshire area, and the Scottish Borders generally. This would be particularly welcome outwith the normal visitor season and would be a great finale to the year which has seen the successful opening of the Jim Clark Motorsport Museum in Duns.

“The economic impact of the proposed event is, as written in the new legislation, a consideration for the Council in assessing whether it should go ahead, however our priority, first and foremost, is that it is as safe as possible for all involved.”