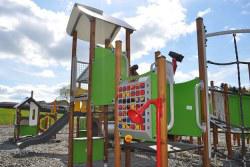 Members of the public and community groups are being invited to provide further feedback on our strategy for the future of play-park provision in the area.

Thank you to all who provided feedback to us this summer.

The strategy was discussed at a local level at each of the Scottish Borders’ five Area Partnerships throughout June.

The meetings were also informed that we currently manage 243 play parks, of variable size and quality. According to benchmarking data, this figure is almost three times the national average for every 1,000 schoolchildren.

The proposals to remove play equipment from 74 play parks which are in the poorest condition would still see the majority of facilities retained.

The Scottish Borders would still remain well above the national average for play park provision when compared to similar sized Scottish councils.

The proposals would only see play equipment removed once the investment is made into the local area, and if a community only has one play park, it would remain.

We are open to communities to taking over maintenance of any play areas which are being proposed for closure and would encourage these groups to contact the local authority by 19 August if interested.

We agreed the £5m play parks and outdoor community spaces programme in May 2018.

Alongside the proposed investments, the report detailed the plans to decommission and remove play parks deemed low value, obsolete or largely surplus to community requirements to ensure we are using its resources in the best way to maximise benefits to young people and families.

The programme aims to ensure young people of all abilities and ages have access to modern, quality play equipment in order to get active in a fun environment, as well as encourage visitors to come to the Scottish Borders through creating new facilities.

It has already proved successful, with new facilities at Galashiels, Oxton, Stow and Harestanes Visitor Centre near Ancrum all being opened within the last 12 months. In particular, Harestanes has proved hugely popular, with the visitor centre reporting one of its busiest ever days immediately after the play park opened.

The Wilton Lodge Play Park in Hawick also remains popular, with a further £200,000 set aside to create a new pump track for cyclists in the park next year, following the recent £3.64m regeneration scheme project funded by the Heritage Lottery Fund and ourselves.

The investment in new facilities across the Scottish Borders can only be made by removing the poor quality equipment from the identified play parks.

“There has been a lot of discussions and comments in local communities since we announced our play park strategy.

“Our new Fit for 2024 programme aims to make sure the Scottish Borders meets future challenges, takes advantages of new opportunities and delivers the best possible outcomes for our communities.

“This investment ticks each of these boxes by providing modern, inclusive and fantastic play parks and outdoor spaces for our communities which will help a generation of children to get outside and active. By reducing our overall number of play parks, but still retaining significantly more than the national average, we can make sure our remaining facilities are maintained to the highest standard.”

“Thank you to all the individuals and community groups who attended the Area Partnerships to have their say on this important matter.

“We would encourage anyone who could not attend or have not provided their views yet to do so by 19 August so they can be fully considered.

“That would include any groups who maybe keen to take on a play park site.

“We believe we are investing in improving the right facilities in the right places but welcome further feedback on the proposals before a final decision is taken.”

Images of some of the new playparks in place are available to download on our Flickr page.