Your chance to choose who gets share of £300k 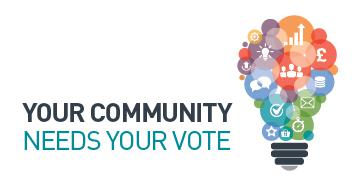 A public vote to decide which community projects get a share of around £300k from the latest round of our Localities Bid Fund is now open.

Applications from projects across the region were received between January and February this year.

A total of 73 bids met the criteria to move to the voting stage:

Find out more about the projects on our website.

The public vote is live now and will close on 7 June at 5pm. People in local communities will choose which projects should receive funding.

Find out how to vote:

Details of public voting events still to take place are as follows:

Projects will be invited along to these events to present more information to members of the public about their applications. You can then vote on the day.

The successful bids will be announced over the summer.

“We have strengthened the voting process after listening to feedback from the previous round of Localities Bid Fund. We’d therefore ask people to make sure they register to vote, which will only take a couple of minutes online. You’ll then get an allocation of votes to spread across the projects in your locality.

“You can register to vote from now right up until the last day of the voting period.

“This is a great opportunity to directly influence where public money is being spent in your town or village so make sure you have your say.”

*Voting was originally scheduled to end on 6 June but was extended to 7 June due to technical issues on the first day of voting.