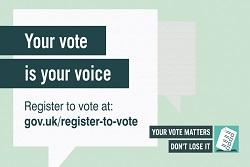 The European Parliamentary Election may take place in the UK on Thursday 23 May.

There is now just one week left for people to register to vote to take part if you are not already on the Electoral Register.

There is also only just over a week to register for a postal vote.

Should the election take place, six MEPs will be elected to represent Scotland in the European Parliament.

To be eligible to vote in the European Parliamentary Election the deadline for voter registration is midnight on 7 May.

Register online or by contacting the Electoral Registration Officer on [email protected] or call 01835 825100.

If you cannot attend a polling station on election day you can:

Anyone now registering for a postal vote will receive it around 15 May.

If you wish to change an existing postal or proxy vote the deadline is 5pm on 8 May.

You are eligible to vote in the European Parliamentary Election if you:

Citizens of the European Union (excluding the UK, Republic of Ireland, Malta or Cyprus) who wish to vote in this election in Scotland need to complete a separate application to vote, accompanied by a declaration stating that they will vote only in the UK.