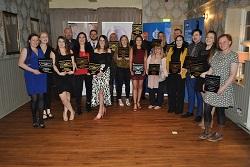 Pubs, restaurants, hotels and a rugby club from the Borders have proudly picked up their Best Bar None Scotland awards at a ceremony in St Boswells.

Bars from across the region have been recognised for their commitment to a safer and more secure environment for the public.

Each premise is now accredited to the Best Bar None scheme.

The Queens Head in Kelso is also in running for a national Best Bar None Scotland award, with a ceremony due to be held in Dunblane on Thursday (28 March).

The Best Bar None Awards is supported by:

Councillor John Greenwell, Chair of the Scottish Borders Licensing Board

“It’s really reassuring to see our bars taking customer care and safety seriously, which is what Best Bar None is all about.

“I congratulate all of our worthy winners and also wish the Queens Head the best of luck in the national finals.”

“We are grateful to everyone who took part in Best Bar None and it was great to see everyone getting their awards. We’re already looking ahead to this year’s scheme, which will launch in the coming weeks, and I hope we can get even for premises signed up.”

Images from the awards ceremony are available from Scottish Borders Council’s Flickr page.

All premises were able to demonstrate to an independent assessor that they met a large number of criteria covering the five key elements of the Licensing Scotland Act 2005: