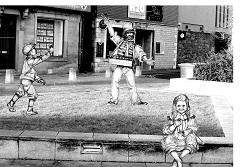 The first image of the new Coulter’s Candy sculpture has been revealed.

Alongside the monument to Galashiels weaver-turned-sweet maker Robert Coltart - who wrote the world famous lullaby which is also known as Ally Bally Bee - two sculptures of a boy and girl will also be included in the final piece.

The design has now been approved by the Galashiels Stakeholder Group and is expected to be completed in two phases over the course of this year by Innerleithen sculptor Angela Hunter.

The finished piece will be installed in the Market Square in Galashiels by the end of 2019, as part of a new town trail supported by the Scottish Government.

For the project, sculptor Angela Hunter worked alongside:

An appeal in January for further information on Robert Coltart saw Angela receive messages from a number of people across Scotland and even Canada, which assisted her with the final design.

The Government provided a £1.18m regeneration grant last year, a proportion of which is being used to fund a £900,000 improvements programme within the town as part of the regeneration of the town.

The funding from the Scottish Government is also supporting new visitor signage and improvements to Channel Street and Douglas Bridge, as well as helping to fund the Great Tapestry of Scotland visitor attraction. The town trail will include the location of Robert Coltart’s one bedroom flat in Overhaugh Street, which he shared with his family.

Seen as the catalyst for the regeneration of Galashiels, the Great Tapestry of Scotland visitor attraction will open in 2020 and will have a range of facilities for visitors and the community to enjoy.

Heritage and culture experts predict the centre will attract over 50,000 people to Galashiels each year once opened, as well as create 16 posts at the facility.

We are currently engaging with contractors on the building of the visitor centre, with construction scheduled to begin in spring 2019.

“I am delighted we now have an agreed design we are able to let the Borders public see.

“The agreed design of the Robert Coltart sculpture is based on newspaper cuttings, including an image we have of him. While we can never be 100% certain of his appearance, the research by Mary and Graeme and feedback to our appeal means I feel I can now portray his stature and personality.

“I will now press ahead with producing a lasting legacy for Robert Coltart that Galashiels can be proud of.”

“Robert Coltart’s story is one that many more people should know about and I hope this sculpture will encourage people to find out how the famous song Coulter’s Candy came to be written by a weaver from Galashiels.”

“We want Galashiels to be a more vibrant, welcoming and confident community. The tale of Robert Coltart embodies this vision, and we are delighted progress is now being made to finally celebrate his link to our town.”

“In line with other regeneration works going on in Galashiels, the Coulter’s Candy project has been taken forward with a number of partners and it was important they all had sight of the initial design before it was issued publicly.

“A real effort is being made to ensure visitors are attracted to Galashiels, and the wider Borders area, and it is worth noting that without the Great Tapestry of Scotland visitor attraction - which helped secure the overall support from the Scottish Government Regeneration Grant Fund - these improvement works would not have been possible.”

An image of the initial drawing for Coulter Candy sculpture is available on our Flickr page.