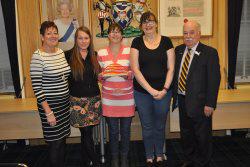 The CEDAR Mums’ Group has been named as recipients of the Scottish Borders Violence Against Women (VAW) Partnership Award for 2018.

The award, now in its second year, was developed by the Partnership to recognise the commitment and excellent work of people in communities across the Borders who are making a significant contribution to addressing violence against women and girls. It had been collectively agreed that there should be some way to recognise these efforts, and that the concept of partnership also includes communities.

The CEDAR Borders programme has been running since 2013. To date there have been 177 referrals, with 98 children and young people and 68 mothers going on to take part in the programme.

The CEDAR Mums were nominated for their commitment to helping their individual families find ways to reconnect while also using the programme to support their own recovery. Judges were further impressed with the way they had gone on to support other graduates at a monthly group meeting and to help professionals be more informed about the reality of domestic abuse. They did this by hosting a conference and workshops in 2017 where they used their lived experience to explain that everybody has a role to play in tackling domestic abuse.

“We are delighted that the award has gone to a group of women who have not only gone on their own recovery journey but have used their experiences to help others.”

Councillor George Turnbull, Executive Member for Community Safety and Chair of the Police, Fire and Rescue and Safer Communities Board

“These inspirational women should be extremely proud of what they have achieved and are truly worthy winners of this year’s award.”