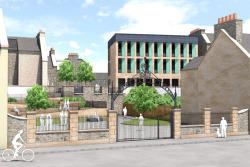 A planning application has been submitted for the demolition of several town centre properties in Hawick and the development of a new business incubator centre.

It is proposed that the former Armstrong’s department store building in Oliver Crescent and two former church buildings in Teviot Crescent are removed to make way for the redevelopment of the site.

A new three-storey building would be created, proving a hub and office space for up to 17 small and start-up business, with the potential to support up to 25 full time equivalent jobs.

The project is one of four to be supported by Scottish Government funding of £3.6million for Hawick in June 2017. This built upon the development of the Hawick Action Plan by ourselves, local business and community groups.

the funding has also been used to develop four industrial units at the edge of the town at Galalaw Business Park, with works almost complete.

In addition, we have committed to upgrading business facilities at the town’s Tower Mill and undertaking feasibility studies for the regeneration of other key properties to inform potential investors.

“Redeveloping this site has multiple benefits for Hawick. It will clear an area of disused buildings in disrepair, provide new, small office units for existing local businesses and entrepreneurs, and it will hopefully act as a catalyst for further property redevelopment and investment in the town from the private sector.

“Thanks to local architects Aitken Turnbull, a contemporary building will be created which fits in with its surroundings and also delivers an attractive public space and pedestrian access through from the heart of the town to the Wee Haugh and on to Commercial Road.

“A significant amount of work has already taken place on this proposal and I am delighted that we are now in a position to put the plans forward for consideration and look forward to the next stage in this vital development for Hawick.”