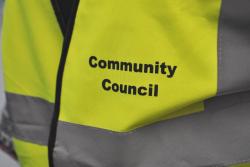 Nominations can be submitted from members of the community whose names appear on the current electoral register for the Greenlaw and Hume Community Council area.

In the event of there being more nominations than places, a ballot will be held.

The closing date for nominations is 12noon on Monday 24 September 2018.

Community councils play an important part in our towns and villages and anyone interested in working with their community is encouraged to put their name forward for this by-election.

Nomination forms can be obtained from locations in the Greenlaw area and also from:

Completed nomination forms should be returned to: