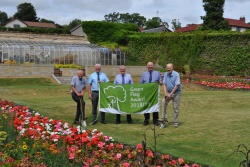 The 43-hectare park is the first in the Scottish Borders and only the second in the south of Scotland to pick up the award, which is the benchmark standard for publicly accessible parks and green spaces across the United Kingdom and around the world.

Judges acknowledged the work carried out to improve the park as part of the £3.64million regeneration scheme, which is due to be completed this summer.

Funded by the Heritage Lottery Fund and us, the regeneration scheme has delivered a number of new facilities including:

There have also been improvements to the walled garden, upgraded waterfall walk and improved Hawick Museum, alongside the busy summer events programme which saw Hawick favourites Scocha play to over 600 people earlier this month.

There have also been a number of other works carried out to the various shelters and memorials within the park, including the Cenotaph, Boer War Memorial, MacNee Fountain, Jimmie Guthrie Memorial, Laurie Shelter and Henderson Shelter.

A £100,000 cycle paths improvements project in the park was funded by the Scottish Government and delivered by Sustrans Scotland, through its Community Links Programme, in partnership with us. A further £20,000 was provided by Smarter Choices, Smarter Placed fund to promote cycling in the park.

Tree planting and improvements to the park’s main entrance, the Common Riding ceremonial area and Gilbert Davidson Fountain are also part of the regeneration project, while a total of 27 interpretation boards have been installed this summer to help visitors navigate around the park’s various features.

The park was developed in the late 19th century from a former private estate.

“This award is a huge honour for Hawick and the Scottish Borders, being the very first park or green space in our region to receive Green Flag status.

“The award has recognised the stunning landscape of the park and the wide variety of new facilities provided through the regeneration project, which has been funded by the Council and its various partners.”

“The people of Hawick are rightly proud of Wilton Lodge Park, and this award confirms its position as one of the finest parks in the south of Scotland.

“The Green Flag award recognises the hard work of the Friends of Wilton Lodge Park, the various volunteers, the project team and the Council’s Neighbourhoods team who have helped make the regeneration of the park a success.

“Wilton Lodge Park already welcomes thousands of visitors each year but we believe its new Green Flag status will encourage even more people to come to this fantastic park, to Hawick and to the Scottish Borders.”

“It is great to see a newly regenerated site, which has been supported by the Heritage Lottery Funding, added to the list of awarded parks.

“We are very proud of all Scotland’s Green Flag Award parks and this year we have had a number of new parks receive their Green Flag. This is clearly recognition for everyone’s efforts in helping to make their local open space a greener, cleaner and healthier place to live, work and play.”