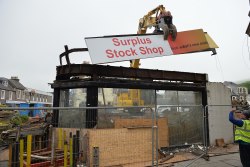 The start of the regeneration of Galashiels is underway with the removal of a derelict town centre building.

The former Poundstretcher building has been demolished and this now signals the start of the major transformation of this area, including a new national visitor destination which will host The Great Tapestry of Scotland alongside a range of other elements that will significantly enhance the visitors’ experience to Galashiels.

Drone footage and photography has captured the demolition as the building was pulled down piece by piece over a seven-week period, which was ahead of schedule.

Construction of the new £6.7million landmark building – which will also see the former Post Office being brought back into use – is now expected to begin in October.

The Great Tapestry of Scotland complex is seen as the catalyst for the regeneration of Galashiels, providing significant economic, social and educational benefits for the town and the Scottish Borders.

Predictions from independent consultants are that the centre will attract over 50,000 people to Galashiels each year once opened, as well as create 16 FTE posts at the facility.

In addition, almost £900,000 of extra spending per year is predicted for the local economy, providing 12,000 extra visits to complementary attractions, supporting a further 17 FTE jobs.

The project has the support of the Scottish Government’s Regeneration Capital Grant Fund which has provided a £1.18m grant in March 2018, a proportion of which is being used to fund a £900,000 streetscape improvements programme within the town.

Executive Councillors on Tuesday 19 June will be asked to approve five streetscape projects to be taken forward with this funding, which include improvements to Channel Street, Douglas Bridge, visitor signage and the creation of the Coulter Candy Trail, dedicated to the Galashiels weaver Robert Coltart who wrote the Scots folk song Ally Bally Bee.

“This is a hugely exciting time for Galashiels and the Borders, with significant progress now being made on the Great Tapestry of Scotland complex, which will kickstart the delivery of the Galashiels Masterplan.

“A partnership approach is being used to take forward the project, highlighted by the fact that the proposed streetscape improvements have all been identified as priorities by a range of community and business groups.

“The removal of the old Poundstretcher building is a significant milestone, and we will continue to work closely with our partners including community, education, arts and tourism organisations to ensure this exciting project - as the first stage of the Masterplan - helps to re-shape the town and encourage investment in Galashiels and the wider Borders economy.”

The Great Tapestry of Scotland is expected to open in spring 2020, and will be managed by Live Borders, the region’s culture and sports trust, providing a link to their existing heritage, education and recreation facilities throughout the area.

“The community of stitchers who created the Tapestry have not only demonstrated brilliant skill and creativity, but also the power of collaboration. Community and collaboration are central to the project for the Live Borders team and we are looking forward to engaging people of all ages, businesses and organisations across the region, and beyond, as the building progresses.”

Mike Gray of Energise Galashiels Trust, a key local community group who have been hugely supportive of the regeneration plans

“It is great seeing another step being taken in our town centre regeneration.

“This investment, along with the efforts being made by the BIDs (Business Improvement District) Steering Group, the support for a Coulters Candy Trail, the work being done by several community groups and organisations with the Gala Remembers 2018 partnership, all show just how much energy and enthusiasm there is to see Galashiels develop as a vibrant visitor destination.”

Alistair Moffat, of the Tapestry Trustees

“The Great Tapestry of Scotland is a national treasure that tells Scotland's story in vivid colours and images.

“It will shine like a jewel not only at the heart of Galashiels’ regeneration but also attract thousands to come to the Borders or stop to discover more about our history on their way north.

“The building to house it is beautiful and its innovative design will mark a turning moment in Galashiels’ story, a time when the centre of the town began to thrive and bustle once more.”