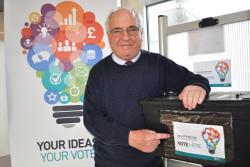 The first ever recipients of grants from our £500,000 Localities Bid Fund have been revealed.

Members of the Borders public decided which community projects received cash from the new funding pot.

The votes are in

Nearly 16,000 people voted either online or through paper ballots across five areas.

Over £200,000 was available during this first phase with 62 applications making it to the voting stage.

"This is the first time we've allocated funding like this and it was heartening to see so many people take part in the public vote.

“Local communities embraced the concept and I think they appreciated the opportunity to directly influence where public money is being spent.

“Congratulations to all the projects that were successful. I strongly believe they will play a big part in enhancing our local towns and villages.

“Running a funding scheme in this way presented us with a huge task. While I believe it has been very successful we will be looking at how everything has worked and take on board any feedback before fine-tuning the process for the next round of funding.”

Find out more about Localities Bid Fund including details about each project.

Plans for the second phase of the scheme will be announced soon. You can play #yourpart by applying for money from the fund to improve your community.

The successful projects were:

We are offering more funding advice and guidance to the projects that were not awarded grants to help them take their ideas and plans forward.