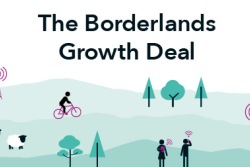 A meeting to discuss the Borderlands Growth Deal was held in Carlisle on Thursday 18 January.

This was the first meeting with UK Government Ministers since the UK Chancellor committed to opening negotiations on a Growth Deal for the area in the 2017 Budget.

The Borderlands partnership includes us alongside the other four cross-border local authorities of Carlisle City Council, Cumbria County Council, Dumfries & Galloway Council and Northumberland County Council to promote the economic growth and competitiveness of an area that straddles the Scotland-England border.

Last year a formal proposition was submitted to the UK and Scottish governments for consideration, focusing on the factors which make the area attractive to investors, visitors and those who wish to relocate. It also aimed to tackle the need for population growth and improved productivity.

The proposition focussed on several key themes, including:

The approach is based on existing physical and infrastructure connections, and transport and connectivity are at the heart of the partners’ proposals, linking the opportunities that can be created and informing future projects.

“We, along with our partners, were delighted to meet with both ministers to discuss the Borderlands Growth Deal.

“The opportunities and ambitions are extensive and the challenges huge but the commitment of local authorities and both UK and Scottish governments to Borderlands is clear and very welcome.

“Clearly we have a lot of work to do but alongside the South of Scotland Economic Partnership, our area has the fantastic prospect of transforming our economy through enterprise, skills and innovation.

“Discussions will continue with the UK and Scottish governments to ensure we seize the opportunity available and we expect to see some significant progress made during 2018.”

“Our shared ambition is to play our full part in the regional and wider UK economy and unlock the potential of the south of Scotland and north of England. We welcomed the opportunity to discuss the Borderlands Growth Deal direct with Ministers.

"Discussions were positive and although they remain at a relatively early stage we look forward to more collaboration and discussion with both the UK and Scottish governments.”

“We are continuing to make good progress towards a Borderlands Growth Deal, which has the potential to transform the economy of the whole region, creating jobs and increasing prosperity. We had a productive meeting today with the five Borderlands local authority partners.

"I was impressed with their enthusiasm for, and the energy behind, creating a transformative deal.  We will continue to work closely with the Borderlands partners to work up the detail of their proposals.

“I'm delighted that we've fired the starting gun today on this hugely exciting coast to coast Borderlands Growth Deal - something that will be unique in the UK.

"I am looking forward to us continuing today's progress working with the Borderlands councils and the Scottish Government in the coming months on developing an ambitious sector led deal that will encourage growth and productivity to create thriving local economies both sides of the border."