We've created dedicated pages to provide information, advice and support during the Cost of Living crisis.

Get help and support

Best Bar None Awards success in the Borders 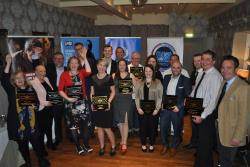 Representatives from 18 licensed premises picked up Best Bar None Scotland awards at a ceremony in the Buccleuch Arms Hotel in St Boswells.

This year’s winners are:

They join an elite group of licensed premises that are accredited to the scheme throughout Scotland.

All premises were able to demonstrate to an independent assessor that they met a large number of criteria covering the five key elements of the Licensing Scotland Act 2005:

The Queens Head is in the running for a national Best Bar Scotland Award in the Best Hotel Bar category while the Waggon Inn is also nominated, in the Best Independent Pub section. Winners will be announced at a ceremony in Glasgow on 30 March.

“Best Bar None continues to grow in the Borders, with a record number of winners this year. This shows that our licensed premises understand the benefits of the scheme and being able to show they are meeting consistently high standards.

“I’d like to congratulate all of our local winners and wish both the Queens Head and the Waggon the best of luck in the national finals later this month.”

“Best Bar None is great opportunity for premises and partner agencies in the Scottish Borders to work together in order to maintain safe and welcoming licensed venues. The process is very straightforward and Police Scotland and Council licensing staff are available to assist participants at all stages.

“The 2017 scheme will launch in the spring and I would encourage all local licensed premises to take part.”

Details of the 2017 scheme will be sent to all licensed premises in due course.

Images from the awards ceremony are available on our Flickr page.

Find out more about Best Bar None Scotland.